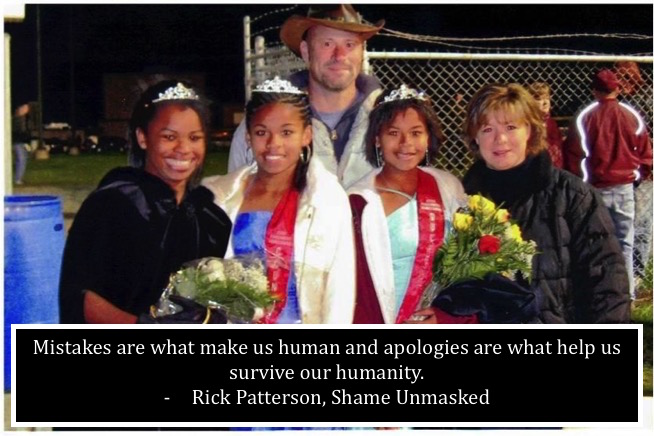 Mistakes are what make us human and apologies are what help us survive our humanity.

This quote comes from the first story in the first chapter of my book and emphasizes what I believe is the most important aspect of being human – that we make mistakes and we hurt each other.

My very first Facebook post contained a picture of my family at our daughters’ homecoming coronation in high school.  All three girls were on the homecoming court for their class in the same year.  It was quite an achievement – the local newspaper was even there to do a story (back when there was a newspaper).

If you saw this picture originally when I first posted it, you may felt envious of our success and in the way our family appears to have it all together.   It’s funny how Facebook pictures can hide what’s really going on…

he trauma became so intense it eventually began to interfere with my ability to pastor the church we started.  I would resign a couple years later after shame got the better of me yet again.  The congregation would cease to exist shortly after that.

You may wonder what turned things around?  It’s hard to say – it has certainly been somewhat miraculous.  But if I were to give credit to ONE skill that we all learned together, it was that we became very good at giving and receiving apologies.  I believe it was this skill that saved our family.