What is Truth? The Destruction of Shame 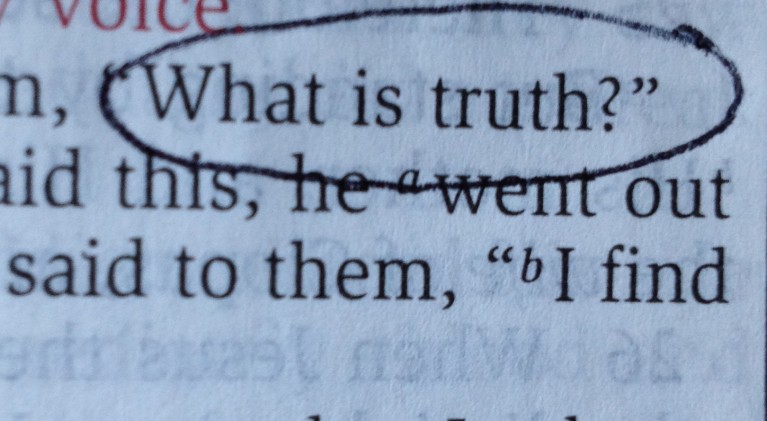 “What is truth?” is the rhetorical question made famous by Pilate during the interrogation of Jesus.  This has become the non rhetorical question in today’s world. We struggle to understand the possibility of “alternative facts”. However we define truth, its end result is the same: truth destroys shame.

Due to this reality, truth is a struggle if we attempt to live by it. My own struggle is no secret. Shame’s goal is to protect us from being exposed and the job of the truth is to expose. Truth and shame are archenemies.

It’s important to see this is actually the reason shame exists. The truth is we are imperfect. Shame’s goal is to prevent that secret from being exposed and getting out. Truth destroys shame and shame destroys it. They cannot live together.

So truth is an exposer while shame is a hider. The more we are and feel exposed – our weaknesses and failures for the world to see – the more pain we are going to feel. Due to this pain, we learn to hide from the truth. The more pain we feel, the more we learn from shame how to deflect, defend, lie, and blame. We get so good at it we begin to believe it.

The Truth: we are weak and needy

Jesus makes this central to his mission on earth. He calls himself the way (which I’ve spoken about), the truth and the life. If Jesus is the truth, then we can define it as vulnerability, compassion, empathy and forgiveness. It is strength in weakness.

Jesus claims the reason he came into the world was to bear witness to this thing called “the truth”. He wanted to show us “the truth”. In his life and death, he demonstrated the power of vulnerability, exposure, and weakness. He testified to the reality that humanity is fragile and needy. When we saw him, we saw the truth and we learned we did not have to fear it.

You can’t handle the truth!

Parenting Exposes You to the Truth

Recently, one of my kids confronted me about my parenting. I had hurt her feelings and it brought up a bunch of stuff from the past. She wanted to know why I didn’t come get her the second time she ran away at age 17.

I was told about how lost and confused she was and how all she wanted was for us to come get her. She said she was just a little girl, our little girl, and we did nothing to intervene or help. She was convinced we didn’t care and that she really wasn’t our daughter as she had thought all along (she was adopted).

Shame to the rescue!

When I heard that I blew a gasket. “How dare you”, I said. “How dare you accuse me of not caring when my heart was bleeding out in that car as I waited at the bus stop for you to get off and I never see or hear from you again for years?”

She left me. She abandoned me. How am I supposed to know what to do in that situation??

Why am I so angry right now? She’s being ungrateful. That’s blame.

As soon as I hung up the phone I realized what had happened – shame won. My feelings were hurt so I defended myself and, once again, at age 49, I reacted with anger and shut down my little girl. I may not be an expert in much, but I know what shame looks like when it shows up and I did the only thing I could do – apologize.

The Apology is the Shame Killer

Fortunately for me, she had the courage to try again – to be vulnerable with me again and tell me how that little girl had been hurt by my actions. And she was right. She had some very good points. I had failed. It hurt. All I could do was apologize.