What Would Jesus BE? 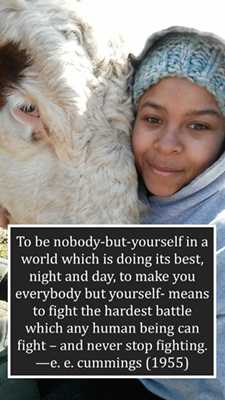 To be nobody-but-yourself in a world which is doing its best, night and day, to make you everybody but yourself- means to fight the hardest battle which any human being can fight – and never stop fighting. —e. e. cummings (1955)

In the 1990’s – as I was making a transition from atheism to Christianity, the phrase “what would Jesus do” and the reminder bracelet was becoming the rage.  As I sat with my daughter at lunch she was struggling with the reality that she could never do what Jesus did and it was becoming a perfectionistic nightmare for her.

I remember that situation occurring in my own self as I was first beginning to decide how much money I should give to my home church after becoming a Christian.

The church’s prescription was that I should give 10%, but that logic fell flat.  Why would I not give more?  The widow Jesus told us to use an example gave all she had.  When I brought that little fact up to people they would just dismiss it by saying “that’d be just crazy”.  Is giving 10% just an easy clean number to allow me to believe I had met the minimum requirement set by God?  Should I ever go out to eat, go on vacation, or buy a new car when I could give that money to the church?  It was my attempt to be perfect and it was maddening.

When we want to change our behavior, we frequently start with the behavior itself and hope, by force of will, that we can change that behavior.  In reality, the behavior exists for some reason and understanding WHY we do what we do provides an opportunity at a much more lasting change.  In my own example, why was I so obsessed with perfection?  What was I really afraid of?

I argue that shame or self-hatred can drive much if not all of our decision-making process using fear as it’s primary tool.  When you look at someone like Jesus, one thing that becomes obvious is that he appears to have no fear.  He isn’t afraid of what people think of him and, even though he has become the most famous person to have ever existed, clearly that was not of concern to him.

The other thing that seems missing from Jesus – perhaps the primary thing – is that he appears to be “a stranger to self-hatred” as Brennan Manning puts it in his book of the same title.

If you add up these two traits you see a man who has nothing to prove and no need to defend himself.  Everything he does seems to be a reflection of simply and fearlessly being himself regardless of the outcome and regardless of the impression it makes on others.

I wonder what might happen to us if, instead of trying to change our behavior to do what Jesus did, we looked at what is preventing us from being who he was.  What if we were to look at how much of our decisions are based in fear – fear of not having enough, fear of looking stupid, fear of being misunderstood, fear of actually BEING understood but being afraid people wouldn’t like what they found.

My daughter, at lunch, asked me if I knew anyone who could completely follow Jesus.  I said I did not know such a person.  I also said I didn’t know anyone who was a stranger to self-hatred either.  I said that the best I think we can hope for is to be in the fight – NOT to do good or stop doing bad – but be in the fight against the voice of shame in our soul that tells us we are not enough causing us to make decisions we later regret.  I told her that we might make more progress setting aside trying to do what Jesus did and tried instead to be who Jesus was.